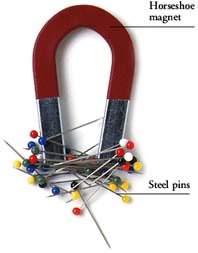 Magnets are objects that attract anything containing iron, cobalt or nickel. Magnets occur naturally but can also be made artificially, by stroking a piece of steel with another magnet, for example. Every magnets has two zones, called its north-seeking poles, where its attraction is strongest. Magnetized materials are made up of millions of atomic-sized magnets, called domains. The north-seeking poles of these domains all point the same way.

A liquid is a substance that flows more freely than a solid, but not as freely as gas. When a substance is liquid, its atoms or molecules (groups of atoms) possess more energy than they have when it is solid, but less energy than they have when it is a gas. This allows liquid to flow and take the shape of its container and form a level surface. Liquids are much harder to compress than gases. This why they are often used to transmit forces in hydraulic machines.